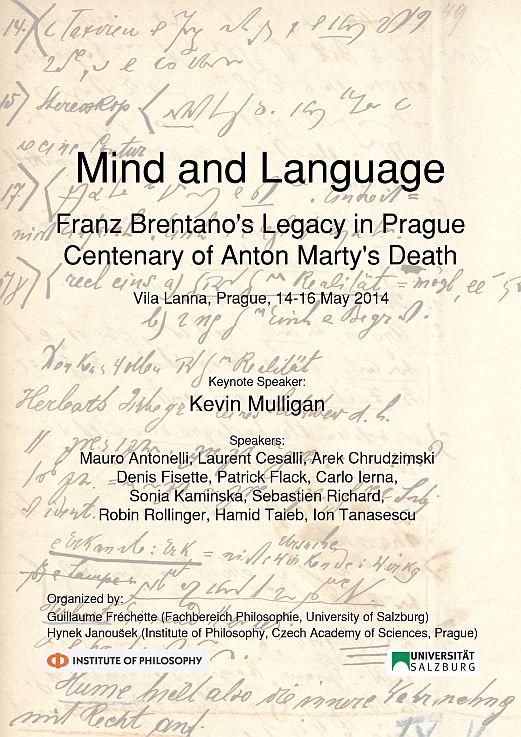 The Czech capital played a central role in the philosophy of the Austro-Hungarian Empire. From Bolzano to the school of Brentano, Prague philosophers from the nineteenth and early twentieth century contributed decisively to the project of a scientific philosophy, characteristic of Austrian philosophy. Thanks to the influence of Prague scientists like Jan Purkyně and Ernst Mach and logicians like Bernard Bolzano, the faculty of philosophy at Charles University soon became a center for the kind of philosophy championed by Franz Brentano. Brentano's early students, Carl Stumpf (1848-1936) and Anton Marty, were appointed professors in Prague as early as 1879 and 1880 respectively. Thomas Masaryk, also a student of Brentano, was appointed there in 1882, followed by further students of Brentano (Christian von Ehrenfels in 1892, Alois Höfler in 1903 and Oskar Kraus in 1909) who all contributed decisively to the philosophical and scientific programme of Franz Brentano.

Marty, who spent more than free decades in Prague, was by far the most influential student of Brentano in the Czech capital. His deep interest in the relations between mind and language left its marks on many of his students, among others on Vilém Mathesius, who later founded the Prague Linguistic Circle with Roman Jakobson in 1926.

This conference will deal with the multiple intersections between Franz Brentano's philosophy and its legacy in Prague, mediated by Anton Marty and carried on by philosophers and linguists working in this tradition. Questions to be addressed may include – but are not limited to – the relations between the School of Brentano and the Prague Linguistic Circle, Brentano and Marty's philosophy of language and semantics, Marty and pragmatics, and Brentanian philosophy of mind more generally. Contributions may take various angles: they may address the mentioned issues from a critical, historical and/or exegetical perspective, or they may propose original accounts of mind and language inspired by – or critical of – Brentanian insights on that matter.