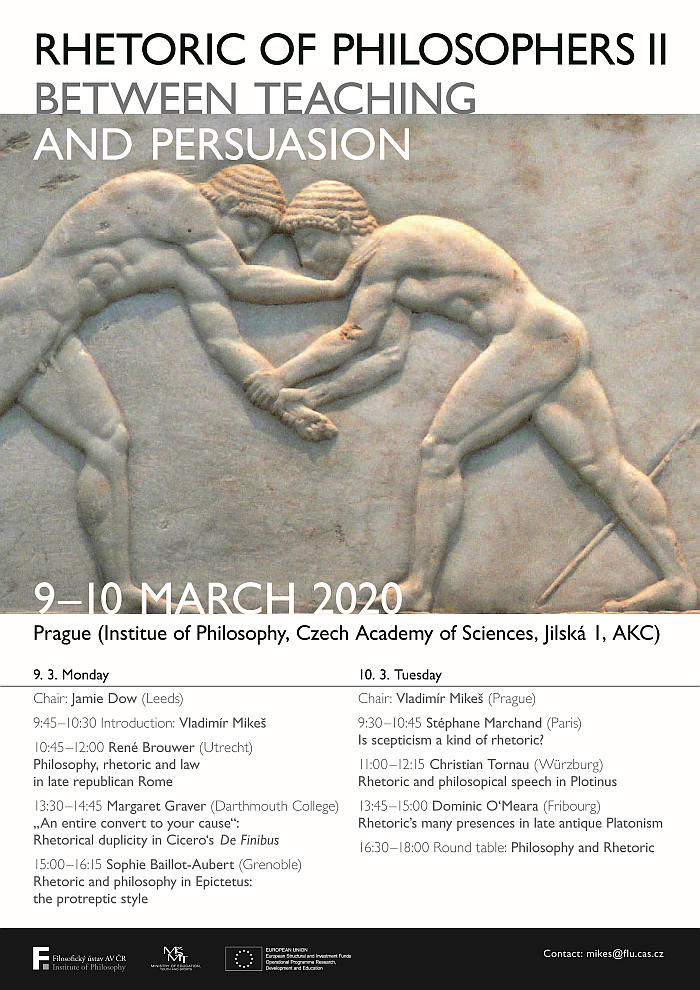 René Brouwer: Philosophy, Rhetoric and Law in Late Republican Rome
In the second century BCE Greek philosophers and rhetoricians started to present themselves in Rome, influencing – among others – the Roman jurists. These jurists also influenced philosophers and rhetoricians. This interaction is wide-ranging; in my paper I will focus on how the conceptions of rhetoric of the first generations of ‘Roman’ Stoics and of the Academic sceptics, notably Philo of Larissa, can be better understood in the framework of Rome’s unique practice of dispute resolution. I will thus reconsider the alleged failure of Stoic rhetoric as well as the influence of ‘traditional’ rhetoric on Philo’s understanding of dialectic.

Margaret Graver: "An entire convert to your cause": Rhetorical duplicity in Cicero's De Finibus
Early in Book 4 of his treatise On Ends, Cicero remarks on the rhetorical handbooks of the Stoics, that they are “required reading – for anyone who wishes to be struck dumb.” His comments are of a piece with his criticism of the Stoic Cato’s “little pin-pricks of argumentation,” and with his larger aim for the treatise: to give a favorable presentation to the Antiochean ethics favored by his addressee, Marcus Brutus. But the apparent Antiocheanism of On Ends must be reassessed in light of Book 5 of the Tusculan Disputations, composed also for Brutus and in the same summer. Reading the two works together and in light of Cicero’s delicate political situation in that year, we can perceive several layers of irony in the attack on Cato’s Stoicism. The consummate orator is here engaged in his own form of philosophical rhetoric, nuancing his own Academic Skepticism to give sufficient force to an ethical position he regards as desperately important for his times.

Sophie Baillot-Aubert: Rhetoric and philosophy in Epictetus : the protreptic style
As the Stoics defined rhetoric as « the science of speaking well », where « speaking well » amounted to « telling the truth », they wavered between a denunciation of rhetorical deception and sophistry, and the defence of speech whenever it promoted moral progress among the listeners. This ambivalence is illustrated by Epictetus (III, 23) ; while condemning epideictic oratory, he considers legitimate a set of three styles (didactic, refutative and protreptic) because they are adapted to the philosopher. The protreptic style in particular, which traditionally aims at exhorting people to virtue, is defined in an original way by Epictetus : it is close to a cynicizing style, such as the one Socrates uses in the Clitophon, a dubious Platonic dialogue.

Stéphane Marchand: Is Scepticism a kind of rhetoric?
In this paper I will defend the claim that, despite the Sextus arguments against Rhetoric in AM II, Pyrrhonian Scepticism shares commons grounds with the rhetorical tradition. The first is linked to the practice of argumentation and the definition of modes (tropoi) or places (topoi) to provide schemes of ready-made argumentation; the second is linked to the very conception of persuasion which can be traced back to the ancient sophistic.

Christian Tornau: Rhetoric and Philosopical Speech in Plotinus
The aim of this paper is to reconstruct a Plotinian theory - inspired by the Phaedrus - of rhetoric as psychagogy. Plotinus distinguishes two ways of addressing the embodied soul, "necessity" (ananke) and "persuasion" (peitho). The difference between these two ways is not one of style or presentation. Rather, "necessity" means arguing about transcendent reality directly and from the principles or premises proper to it, while "persuasion" approaches it indirectly via its image, i.e. soul itself. To persuade soul of truths about the Intelligible means to highlight those features of it that are "like" the intelligible, e.g. self-reflexivity or immateriality. I shall then give some examples of how these two ways combine in the Enneads to further the soul's philosophical ascent to intelligible reality. Special attention will be given to the question of how it is possible to speak persuasively of the One, which, strictly speaking, does not have an image at all.

Dominic O'Meara: Rhetoric’s many presences in late antique Platonism
In this paper I would like to sketch the various places and functions that rhetoric occupies in the Platonism of Late Antiquity. In Part I I will consider this Platonism in its activity in teaching and in philosophizing. Among the functions of rhetoric in teaching, I will consider the use of rhetorical principles in the composition of philosophical biographies, of protreptics (to philosophy, to mathematics), of discourses on the gods, as well as in pedagogical practice and in philosophical argument. In Part II I will consider philosophy’s use of rhetoric in the context of social and political life, both as regards real situations (Sopatros, Synesius) and as regards an ideal situation where philosophy could rule. In speaking of rhetoric, I will refer to it as discussed by Plato and to the rhetorical manuals of Late Antiquity.

Round table: Philosophy and Rhetoric